You Can Smoke Weed In Amsterda..

A Coffee Guide To Gothenburg, Sweden

Behind The Milk: Ozark Mountai..

A Coffee Guide To Gothenburg, Sweden Although Gothenburg is Sweden’s second-largest city, the specialty coffee scene is often overlooked here in favour of those in Stockholm and the smaller Malmö. But Gothenburg has plenty of coffee cred to back up its choice as the venue for this year’s Nordic World of Coffee and Re:co Symposium. Like everywhere else in Sweden, there is a strong tradition of fika and an inborn love of coffee, and since the creation of internationally-known roasters Da Matteo eight years ago, it has been a slow but steadily evolving scene. Now that scene is ready to explode: two of the cafes on this list have opened in the last few months, and many more are sure to follow. For now, though, here is a short guide to the cream of the crop when it comes to coffee in Gothenburg. Opened on March of this year, Alkemisten is the hottest new cafe in Gothenburg, yet it’s already making waves in Gothenburg and throughout Sweden. Owner Kristian Hedborg runs the coffee shop alongside his sister Mikaela on a busy road in Hisingen, Gothenburg’s up-and-coming but still rough around the edges neighbourhood north of the river. They serve Sandby coffee, pulling shots on a Rocket espresso machine and using a beautiful copper gooseneck kettle to brew their Hario V60 pourovers. They also serve small sandwiches and other fika-friendly snacks, like the ubiquitious cardamom buns. Hedborg says he loves celebrating the diversity of Hisingen, and enjoys inviting different musical acts to come perform in the café from time to time. Also serving coffee in the Hisingen neighbourhood is hyper-local, cycle-friendly café Llama Lloyd. The tiny space has six bar seats and a two-seater table inside, with a jumble of tables outside on the sidewalk (weather permitting). Succulents in bright yellow pots decorate the window ledges and match the sunshine yellow branding of the Llama Lloyd logo. Owner Robin Olsson, who previously used Llama Lloyd as the name of his music blog, told me that he came up with the unique name because they were the only two words he could think of in English that both started with a double-l.

As one might expect from a cafe with a quirky name and story, there are plenty of lovable idiosyncrasies here: customers arriving on bikes receive a 10% discount, and almost all of the food, including the bread, soup, kladdkaka (chocolate cake), muffins, and cookies are all homemade by Olsson, an avid baker and soup enthusiast. Per Nordby coffee is batch-brewed on a Marco Filtro brewer, but you can also have an individual pourover as you’d like. No espresso coffee is served here, but the friendly neighbourhood locals don’t seem to mind.

Llama Lloyd is located at Väderkvarnsgatan 16A, 417 03 If taking the tram over the river isn’t your thing, then there’s plenty of coffee to be had in the centre of Gothenburg. The original specialty coffee shop in the city is Da Matteo, specifically the one on Vallgatan. It opened in 2007, and since then, owner Matts Johansson has continued to evolve and grow the stores to keep up with the changing coffee industry. Just across a small cobblestone square from the original location, one can find the Da Matteo roastery and bakery where the company roasts all their coffee and bakes all of the bread and pastries for their cafes. While these central locations are often buzzy and full, especially on the weekends when Gothenburg locals and tourists flood the area to shop at the surrounding chic lifestyle and homewares stores, my personal favourite is located in tiny Victoriapassagen.

Just a five minute walk from the roastery and Vallgatan stores, the Victoriapassagen cafe is hidden down a sidealley behind the famous Flickorna Kanold chocolate store. It keeps good company, sharing the passage with a boutique clothier, an upscale stationer, and a cosy interior design and homewares store. On weekends, the little round tables outside are perfect for hiding away from the hustle and bustle of the surrounding shopping district while mulling over a cappuccino and a fresh cinnamon bun. 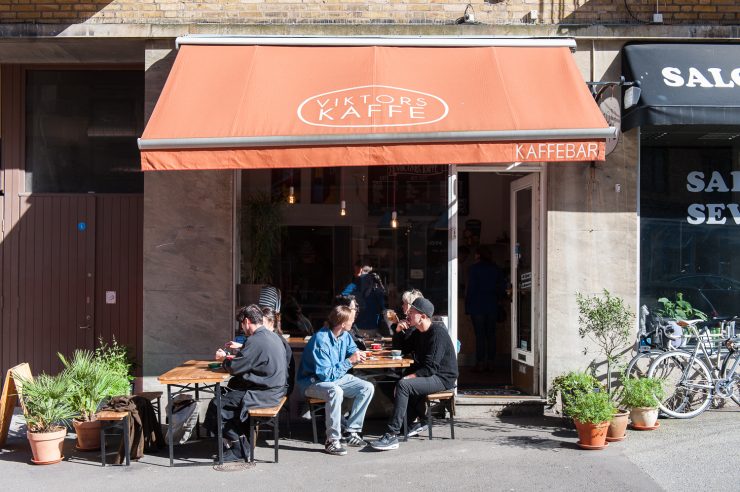 Viktor’s Kaffe has been hanging out on Geijersgatan, just off the main Avenyn, since 2012. Founded due to the owners’ “weakness for coffee combined with interests in music, art, and interior design”, Viktor’s serves Johan & Nyström coffee alongside sandwiches, croissants, fresh juices, and other small snacks. A rotating selection of art adorns the walls and lends a pop of colour to the space. Sitting atop the particleboard countertop is an array of instruments for getting the perfect cup: a Mahlkönig EK43 grinder and a row of Hario V60 brewing cones adorn one side, while espressos are made on the other side with their La Marzocco Linea Classic espresso machine. Because of its proximity to the Gothenburg Museum of Art and the Avenyn’s many shops, it’s a good place for grabbing a mid-shopping spree coffee. Another new darling of the Gothenburg coffee scene is the most gemytlig (cozy) of all. Hidden away in the corner of a white-washed courtyard, walking into Kale’i feels like entering owner Elin Conradsson’s living room (if that living room had a La Marzocco GB5 espresso machine). Blankets and faux fur throws decorate the wooden benches, and at the very back of the shop there’s even a secret snug carved into the wall for when you really want to get away from it all. In the morning, a small breakfast buffet of Turkish yoghurt, freshly baked bread, and sliced fruit is offered—a refreshing and light way to start the day.

Behind the counter Conradsson makes milky coffees and pourovers from a sizeable selection of Per Nordby coffee; her parents can often be found helping her on busy days, with her dad helping out on coffee while her mom deftly twisting cinnamon bun dough like only the Swedish can. All of the coffee is served in beautifully decorated porcelain cups and matching saucers, a homey touch that does even more to set this cafe apart from all the others. It’s the kind of place that looks like the picture-perfect setting for whiling away a rainy afternoon, wrapped in a blanket and reading a book; or when the sun graces Gothenburg, there is plenty of seating in the courtyard for basking over your fika. Kate Beard is a Sprudge staff writer based in London. Read more Kate Beard on Sprudge.