What Do Auckland And Kansas Ci..

Food and coffee. Made for each other? Or made better next to each other? Turns out many cities around the world have their own take on the matter, and we’ve put a few together for you in this here listicle. But fair warning: ain’t none of this too fancy. Our selections aren’t “high end,” but if you’re too “Third Wave” to enjoy any of the following, you need to check yourself, lest you wreck yourself out of enjoying some of the most delightful food and coffee pairings known to man. Here’s 5 of our favorites.

Go at 3AM, so the powdered sugar mess you make of yourself won’t be judged too harshly. Dunk the beignet in the coffee, drink up the sludge at the bottom, and thank us over a Bloody Mary the next morning at Coop‘s.

Get a hot, fresh stroopwafel from the Albert Cuypstraat market. Put it right over the top of your coffee cup. Wait for the stroop to droop over the side of the lid, then gobble it down and slug back some of the coffee. Repeat.

What could possibly be more Seattle than the chance to “do a PSL” and grab one of Top Pot’s unbelievably delicious maple bar donuts while you’re at it? Maple bars are beloved up and down the I-5 corridor, and Top Pot’s is one of the region’s finest expressions of this delicacy. They are so good, in fact, that the Seattle Seahawks have had trouble with their star players breaking and entering at 3 A.M. to “borrow” fresh baked Top Pot maple bars. Remember: Mutual possession (of both donut and football) rightfully belongs to the receiver.

First you bite the corners off both ends of your biscuit, and then you suck your macchiato up through it, sending you on an instant sugar and caffeine high that’s sure to get your morning started right. It’s no babycino, but the “Tim Tam Slam” sure is a delicious way to feel like a five year old.

Everyone is a bodega partisan in New York, and which one does your breakfast sandwich just the way you like it can be a big determinant in whether you go to this bodega, or that other bodega right on the opposite corner, or that other bodega a block down. People can disagree on the proper cheese, or whether it goes on a roll or a bagel, or even if said roll or bagel should be toasted, but the basics are agreed upon: breakfast involves bacon, egg, cheese, and a big cup of sketchy coffee drowned in milk and two heaping scoops of sugar. Is it fancy? No. Is it utterly New York in the best way imaginable? Yes. 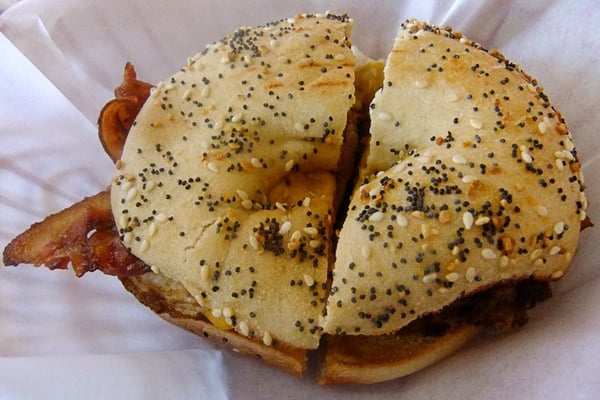 The correct answer is “swiss, on an everything bagel, lightly toasted,” fyi. (Yelp)

There Is Now An Espresso Bagel

It Came From The Espresso Machine