This Coffee And Rum Infusion W.. 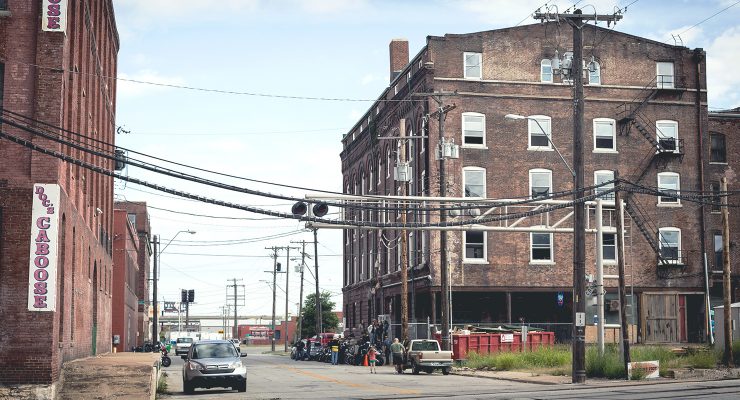 The West Bottoms neighborhood of Kansas City brings a variety of things to the minds of locals—haunted houses, trains, abandoned warehouses, and The American Royal and its famous annual barbecue competition. Blip Roasters hopes that soon, it’ll also be known for great local coffee.

Once the booming heart of Kansas City, the West Bottoms neighborhood has seen a number of bumps in its 150-year history. Multiple devastating floods cut short the potential once found in this now-dilapidated post-industrial refuge. While it was once the home of the illustrious Livestock Exchange and The Union Depot (at its time the largest building west of New York), the district now appears to the outsider as a dusty maze of weaving train tracks and shuttered factories, stained by vintage advertisements and graffiti marred by time.

At a second glance though, one finds the proverbial phoenix rising out of the ashes in the form of new businesses, restaurants, and a whole populace of creative individuals keen on seeing their independent neighborhood flourish once more, informed by its history this time—a mixture of great successes and great tragedy. It’s with this neighborhood-forward mentality that business partners Ian Davis and Conrad Amirof embarked upon Blip Roasters. For decades now, the West Bottoms has been the off-grid destination for many artists’ studios and gallery spaces. The solitude of the neighborhood has allowed for uninhibited creativity to flourish and develop independently of some of the more frequented arts districts in Kansas City. That shared attitude and self-sufficient freedom has attracted several other break-out businesses to the area—from Cafe Racer, a custom motorcycle repair shop, to Voltaire and Genessee Royale Bistro, two of Kansas City’s premier restaurants. Weaving all of these businesses together is a fine network of antique malls and seasonal, high-production haunted houses.

This eclectic locale has played a huge role in Blip’s self-appointed responsibility. “It had to be the West Bottoms,” said Davis of the duo’s choice to grow their new business. “It’s a neighborhood people haven’t really reached out to. There’s a lot of people that live down here, and most other people just think of it as haunted houses.”

Part of what has kept community outreach at a minimum over the years was a reputation for crime. Over the past several years though, the West Bottoms has gone from having one of the highest crime rates in the city to one of the lowest through municipal attention and action. Now that the dust finally seems to have settled, the long-awaited rise of the West Bottoms may finally be coming to fruition. Blip Roasters comes ready to help facilitate the growth of the neighborhood by supplying their neighbors with a high-quality product in a familiar setting. “If I wear a shirt that says West Bottoms on the back and people who live in the West Bottoms won’t come into my shop because I serve coffee that’s four bucks a cup, then I’m not being true to my neighborhood,” Davis acknowledges. He roasts all of Blip’s hand-selected coffees on a three-kilo US Roaster Corp roaster built in nearby Oklahoma City.

“Our struggle here is me wanting to have really nice coffees, but our customers are still going to want a two-dollar cup of coffee.” To meet these demands, Blip has dialed in a BUNN ICB-Twin brewer and Ditting grinder for all their drip coffee needs. Blip’s walk-up coffee bar, at the peak of an inviting, open-air deck, delivers a simple and straight-forward coffee menu across the board. All espresso drinks are prepared using a single Mahlkönig K30 Vario grinder and a La Marzocco FB/70 customized with GB/5 quarter-turn steam wands, PID temperature control, back lights, and beautiful graphics applied courtesy of Midtown Signs.

Keeping things blue-collar and approachable is part of Blip’s overall aesthetic, which incorporates its passion for custom and vintage motorcycles and various high-quality, hand-crafted riding accessories into almost every aspect of the business. Every Sunday morning at Blip, a huge gathering of every corner of the Kansas City motorcycle scene meets up to drink coffee, talk bikes, and eventually sets out on a group ride with various destinations that change from week to week. The riders call it “Sunday Church”.

“We want people to have something fun to do. People want to ride on Sunday, they want to drink coffee, they want to talk shop, and look at bikes. There’s a huge diverse group of people who come down here,” said Davis. Blip has hosted other events such as haircuts on the deck with beers provided on tap by Velowagon, KC’s mobile bicycle-repairing beer-wagon. Along with Triumph and Saint C.C., they are also the sole local sponsor of the “Distinguished Gentleman’s Ride“, the annual meet-up/group ride of dapperly dressed motorcyclists with the purpose of raising awareness and helping fund the cure for prostate cancer, occurring in over 400 cities in the US on Sunday, September 27th. Future events include motorcycle maintenance and coffee education, but probably not at the same time. The West Bottoms of Kansas City has paid its dues over the years. Its inhabitants have had to fend for themselves in order to create the environment they want to be a part of. Traditionally, the definitive cafe has served as a meeting hub for its community, which is what Blip Coffee Roasters has set out to become to their neighborhood. Through honesty with both themselves and their neighbors and simply having a fun place to hang out, Blip is working to propel a community on the rise. Big things are happening these days in the West Bottoms of Kansas City and I look forward to seeing it all unfold in years to come.